Community leaders looked south from the Piney Point ferry landing in the early 1950s and envisioned a thriving seaport to promote trade and commerce, provide a steady tax base for the community and create new jobs in Manatee County. 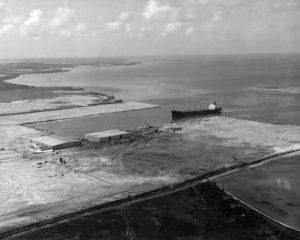 The M/V Fermland was the first ship to dock at Port Manatee.

Port Manatee hosts the largest ship to ever call on Tampa Bay at the time, the 732-foot Zenkoren Maru No. 5 carrying 12,000 tons of potash.

Berth 12 provided key services for the reconstruction of the Sunshine Skyway Bridge.

Regal Cruises sailed from the cruise terminal at Berth 9.

Manbirtee Key transformed into a bird refuge in partnership with Gulfstream Natural Gas System and Audubon of Florida.

Gottwald HMK 6407 Mobile Harbor Container Crane made its first pick, opening the door to a new era of container shipping at Port Manatee.

The Port Manatee Encouragement Zone is established to attract major shippers and to entice the relocation of distribution facilities and support industries to a vast green field area neighboring the port.

Port Manatee finished construction of the initial 10 acres of the first phase of the South Port Intermodal Terminal, a planned 52-acre containerized cargo and vehicle-handling facility. Also completed is the development of the 40-foot-draft Berth 14, which, combined with the adjacent Berth 12, provides 1600 feet of contiguous berthing area.

SeaPort Manatee is being launched as the forward-looking identity of the Manatee County Port Authority’s dynamic global trade gateway on the Gulf Coast of Florida.